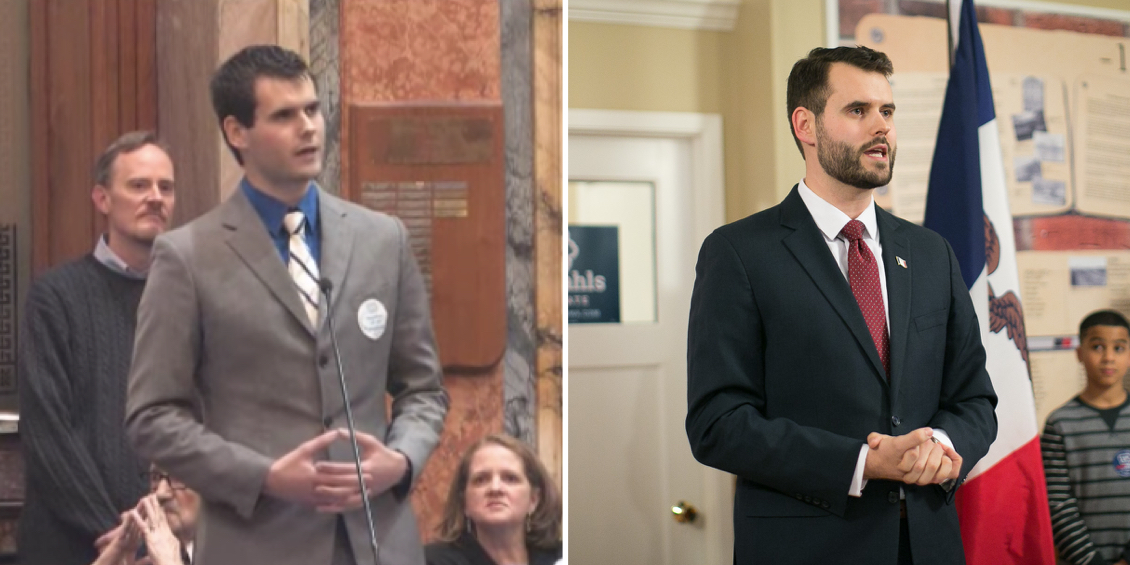 Seven years ago today, I woke up early, put on a suit and tie, and went to my classes at the University of Iowa. I was nervous all day, struggling to focus, reviewing in my head over and over the words I had written the night before. After class, I got in my Pontiac Grand Am and drove to Des Moines as a light snow fell.

The call for speakers had gone out a week earlier. Iowa Republicans had decided their top legislative priority was rolling back the unanimous Iowa Supreme Court ruling recognizing marriage equality for same-sex couples like my parents.

When I heard the call, I knew I had to speak because I remembered how scared I had felt in the eighth grade, watching the 2004 Republican National Convention for a homework assignment, and hearing politicians talk about the dangers of terrorism in one breath and families like mine in the next. I knew what it felt like to be afraid of our government. And I remembered how lonely and isolating it felt to not have a voice and not see anybody standing up to fight back. I knew that “eighth grade me” would have been very disappointed in “college sophomore me” if I didn’t speak up.

When I walked into the Capitol, I was overwhelmed by the standing-room-only crowd. The chamber was packed with lawmakers, activists, and reporters. My name was eventually called. My heart was racing. I set my iPod down on the desk in front of me, hit start on the timer, and put my hands in my pockets because they were shaking. I said what I had to say.

Seventy-two hours later, my life was turned upside down as the video of my speech went viral. It was gratifying at first but excitement gave way to terror as I realized that my words had taken on a life of their own. I had a choice to make: do I go back to my relatively normal life as an engineering student or keep fighting?

I’ve spent the last seven years standing up for families like mine and people who have been left behind and left out. I signed on with One Iowa to crisscross our state talking about why marriage equality matters. I campaigned with Justice Not Politics to protect our supreme court judges from right-wing retaliation in 2012.

I co-founded Scouts for Equality, which overturned the Boy Scouts of America’s decades-old ban on gay youth and adults. I led this organization which peaked with over twenty full-time staff and mobilized hundreds of thousands of people to join our movement. And we got it done. Today, no Scout has to worry that he will be rejected because he is gay or transgender or that his family will be excluded or left out because he has two moms.

As Executive Director of the organization, I wore many hats, and I spent weeks at a time traveling all over the country. I had to lead a staff, raise money, represent our campaign in national media, and develop and execute a winning strategy to change the policy of one of America’s preeminent social institutions. Founding and leading Scouts for Equality was the most difficult thing I’ve ever done — until about six weeks ago.

I decided to run for the Iowa state senate because our state has a choice to make. Do we carry on with business as usual or do we choose to stand up together against the continued attacks on health care, education, and workers’ rights? In 2011, I chose to stand and fight for what I believed in. Today, I’m asking for you to rise with me to stand up for the values of our community.

When I think about community, I think about family. And as I said that night at the Capitol, what makes a family is our commitment to each other — to work through the hard times so we can enjoy the good ones. And that’s what makes a community too — our commitment to each other. This is an all-hands-on-deck moment that will determine the future of our state for generations to come. We must choose to do the work it takes to win. That’s what I did seven years ago and what I want to continue to do in the Iowa Senate.

I know many of us feel left behind and left out right now. I’m running for the Iowa Senate because I’ll never forget how it felt to be excluded, or how hard we had to fight to get a seat at the table. I’ll never forget what it felt like that night seven years ago.

I’m standing up again to fight for your family the same way I fought for mine.